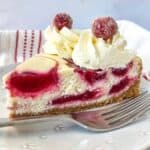 Note on vanilla bean paste: I love the kick of vanilla flavor (and the beautiful vanilla bean flecks!) from the vanilla bean paste in this cheesecake! If you're looking for vanilla bean paste, you can find it [here]. If you'd like, you can substitute with an equal measure of vanilla extract.
Note on springform pan: You can use a standard 9" springform pan (like this one [here]), but I LOVE my "push pan." This pan's bottom has a silicone seal that's waterproof. This recipe requires a water bath, and you can just set the pan right down in the water with no leaking! You also don't have to worry about anything dripping out of your pan and burning in your oven with other recipes. If you're interested in one for yourself, you can find one [here].
Notes on water bath: Baking the cheesecake in a water bath helps to ensure gentle, even baking and helps to avoid cracks in the top of your cheesecake. I place my 9" cheesecake pan into a larger roasting pan in the oven, then fill the roasting pan with hot water about halfway up the side of the cheesecake pan (be careful that you don't pour any water into the cheesecaeke!).  If you're using a conventional springform pan, you will need to wrap the bottom of the pan in at least two layers of heavy duty foil prior to placing it in the water bath. If you prefer not to wrap your pan and place it directly into the water, you could try putting a pan of water on the rack below the cheesecake. It won't provide the same insurance policy as baking it in the water bath, but it will help. Safety notes: Always fill the pan while it's in the oven (I use a large pitcher) so you don't have to cross your kitchen with a large pan of hot water. Similarly, remove only the cheesecake from the oven once it's done baking, and not the whole roaster. Leave the larger pan with the hot water in the oven to cool before attempting to remove it.